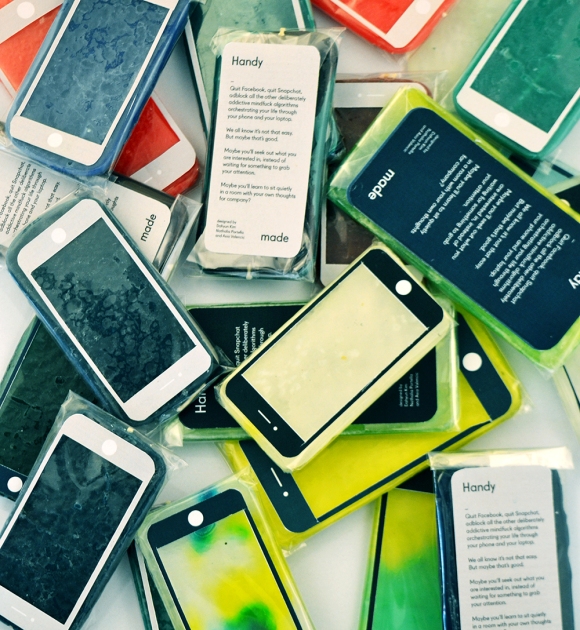 It is clear that the introduction of new media, especially in the form of smart devices, has had an enormous impact on contemporary society from a social scientific perspective, as we grow ever more reliant upon it. As the author James Katz writes in his book Perpetual contact: mobile communication, private talk, public performance:

“They [mobile phones] have transformed social practices and changed the way we interact, yet surprisingly we have little perception on their effect in our lives.”

the psychological effects caused by the interconnection with digital technology are commonly accepted and more openly discussed.

As the merging movement of diverse media produces a global public sphere that is changing the ways we work, play, write, teach, think, and connect, new behavioural patterns are emerging.

Smartphones are so central to our lives that being separated from them for any length of time can put people into a high state of anxiety. Researchers have been looking into the reasons for our ‘smartphone separation anxiety’ – known as nomophobia – and found that it has little to do with being unable to make or receive calls.

“When users perceive smartphones as their extended selves, they are more likely to become attached to the devices, which, in turn, leads to nomophobia by heightening the phone proximity-seeking tendency” Dr Ki Joon Kim, of the City University of Hong Kong.

The Handy Made project intends to represent a moment of intermission in a hyper-connected everyday life and offer ground for reflection. The project aims to raise awareness and to initiate a critical discussion about the profound interconnection between individuals and digital technologies.

In order to address the psychological effects provoked by the growing pervasiveness of new media, the project strives for enacting dynamics focused on tackling the distress raising from the mobile separation anxiety (nomophobia).

Considering the combination of our objective (the intention of the intermission in hyper-connected lifestyle through alternatives actions), the specific features of use from the object in analysis (the smartphone as an extension of the body) and our decision by a playful and ironic approach, we came up with an unconventional possibility for coping with distress by translating therapeutic practices into products which will act as palliatives for issues related to smartphone separation anxiety (i.e. Nomophobia). 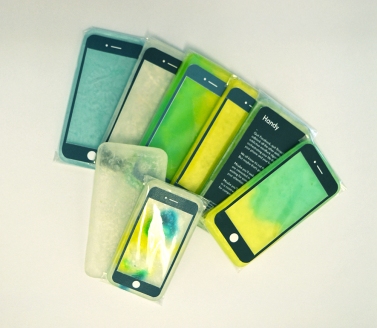 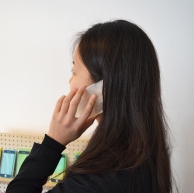 relation to the context – relaxing activity (symbolic value) [use]

The objects are represented by the prototypes (candle and soap) refer to relaxing, meditation, reflexion and even cleaning moments which symbolically suggest the user to engage in a beneficial and offline activity, considering the counterpoint of hyper-connective lifestyle, which the time only for yourself or the human interaction without technological devices interference are scarce.

The smartphone can be perceived almost as an extension of our body and minds. It is integrated in our everyday life in a physical perspective considering the relation of proximity with our bodies, apart from the fact the it works as external memory, collecting data and saving moments of our lives. By designing objects with similar physical features as smartphone but with other functions, we aim to recreate a different feeling of connection to the device.

Handy Made Candle melting video (click here to watch it)

By using materials as glycerin and wax we reframe their characteristics of melting or dissolving process over the smartphone detachment. The prototype shape will be distorced and vanished over the time, representing the disappearance of the anxiety and reliance related to the overuse of smartphones.

In order to bring our project to the audience, we decided to plan an action in public space.

Our action has been designed not only to create a moment of interaction with the public and collect feedback from it, but also to present a playful vision which is capable of challenging the mainstream conception of technological devices, and moreover making visible alternative perspectives which are framed into practices of counter culture.

We choose Karlsplatz for this experiment since it is regarded as a multifunctional space. It offers broad audience by means of two different lines of subway, commercial area, furthermore connection to the diverse public spaces. Long hallway of the Karlsplatz leads passengers to the park, square and several educational institutions includes TU Wien. Karlsplatz station is also the spot which frequently has been used by passengers as a meeting point, transfer station. Therefore it is common to see people using their smartphone while they are waiting for their companion or the other public transportation.

As an essential part of our action, a performance has been planned to introduce the project to the public. By using very little details (e.g shower gown, mirror, bowl with water), we invited the audience to be spectators for the very intimate and private situation, as i was washing myself in what appeared to be a bathroom set within a public space.

The performance seeks to reenact a situation where our product might be used while it symbolically represents the privatization of a public space as conceptualized by James Katz – “One of the most distinctive characteristics of a mobile phone is that it privatizes public places. Interacting with a mobile phone in the presence of others lends itself to a certain social absence where there is little room for other social contacts. […] Non-verbally, the mobile device leads to “closed” and “passive” public behavior”

The action in public consisted in a experimentation aming to collect the audience feedback about the introduction of our prototypes and the presentation of an alternative attitude over the use of smartphones. The performance was fundamental to caught the audience attention, arouse their curiosity and invite them to take a closer look.

The people we had the opportunity to talk with, we could perceive an instant identification to the topic as soon as we explained it. Some of them even shared a feeling of guilt related to the overuse of the smartphone.

Teenagers showed a bigger interest to our products. Since they are the part of the native smart-technology generation, they are very much connected and interested into the topic we brought up. We managed to ask several questions to them – which part/function of smartphone compels them to use their devices, if they got bothered by spending too much time on checking or using their smart devices. We gave them our products after we interviewed and explained them about our project. They could choose between candles and soaps, most of them took soaps rather than candles.

As funny fact, our prototypes also caused trick effects. Some people approached our display thinking we were dealing with real smartphones, however, as soon as they realized that they were candles and soaps, they immediately lost their interest.

All in all, we want to conclude by saying that the most important aspect of our project was to actively present an alternative perspective about such crucial and cross-border topic and trigger reactions in people. We succeed in initiating a discussion and provoking critical self-reflection about certain habits related to the misuse of smart devices.

However, conclusive data couldn’t be collected in order to prove whether or not our prototype produced therapeutic effect on the people addressed during our action, as we couldn’t check in if further benefits have been taking place in private setting.

After this first action, we realized that in order to gather more information and personal feedback about this issue and its effects (nomophobia), we would need to frame the discourse in a longer lasting format which could take form of an event, specialist’s talk and/or an exhibition. 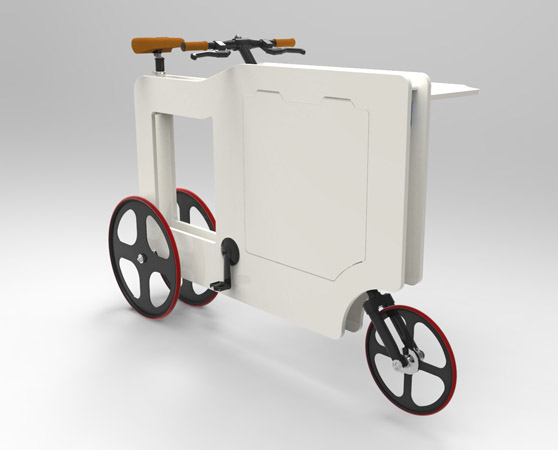 Bicycle design for the merchants, and furthermore, for outdoor activities.
It’s hard and irksome to carry all the stuff from place to the other place.
Many of merchants  sometimes need to bring their own table or rent it to display and sell their products .

With the tables on both sides of bicycle, users can display their items and carry their stuff very easily especially with the hangers on the tables.